The Summer Show provided a reminder of what the Horsham Horticultural Society stands for. We met at North Heath hall on August 7th. There were lots of entries giving members and their families the chance to examine flowers, fruit and vegetables up close and we had a lot to enjoy. There was much  uncertainty over Covid-19 regulations which we were obliged to follow, the hall was clean and well ventilated, there was outdoor seating arrangements provided, disposable plates, cups and cutlery and the option of wearing masks, we even had our own QR code for “Track and Trace”.  Our judges arrived promptly. Ron and Brenda Thomas from Pulborough spent nearly two hours in heated discussion about the relative merits of entries, they were dedicated and professional in their task. During the morning the hall was filled with the delicious aroma of sausage rolls as family rivalry played out in the food section. Our Judges Gillian and Vic Mansell from South Holmwood, took great care in admiring and sampling the edible entries and assessing the merits of artistic creations. Many thanks must go to our judges who maintained a critical eye on the proceedings.

Our guests had time in the afternoon to examine the entries, buy raffle tickets and plants as well as enjoy tea and cakes. Prizes were presented as a finale and it was a chance to thank all the competitors for the time and love they had put into their gardening to make the show so enjoyable. Well done everyone!

Maybe we can look forward even better shows in 2022 as we recover from the pandemic.

Trophy winners for the 2021 Summer Show

A welcome number of visitors came to view the spectacular exhibits on display at Horsham Horticultural Society’s Summer Show, staged on the 3rd August, at North Heath Hall, St Marks Lane, Horsham. Again, another recent record broken this year, as the number of entries exceeded 220 making this year’s show a very special event. For the first time photographic entries were excluded as they are now staged at the Spring Show. The afternoon event was thoroughly enjoyed by members and the public alike. Flowers, fruit and vegetable produce judging was undertaken by Mr Ron Thomas and his wife Brenda. The Domestic & Floral Art Section was judged by Mrs Gill Mansell.
Mrs Margaret Rogers and husband Neville were awarded with the first 5 trophies of the afternoon for their outstanding entries in the Flower, Fruit & Vegetable sections which represented the hard work achieved in growing their produce 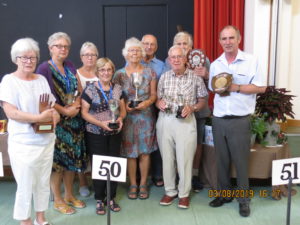 . Mr Geoffrey Kirk won a trophy for a magnificent orchid which was deemed Best Exhibit in the Flowers, Fruit and Vegetable category. Vice Chairman Derek Santer was awarded first prize for his large display of Japanese Wineberries an unusual variety of soft fruit which caught the attention of the judge

Other outstanding entries were made by Mrs Sue Hammond, Show Secretary, for her entries in the Domestic Section whilst the Garden News Shield was awarded to Mr Paul Dalby for his entry of potatoes.

Recent new member Mrs Linda Clinton displayed a splendid knitted cardigan for a child, for which she was awarded the Handicrafts Trophy whilst Mrs Diana Hartley’s beautiful rose exhibit earned her the Rose Bowl.

The Chairman set a difficult competition requesting a display using an upcycled container using seeds or plants gained for free! This proved a challenge too far for most members but the entries staged were very inventive with a disused slug pellet container being used, a discarded waste bin and an adapted watering can displaying a magnificent Coleus plant. This was staged by Mr Vic Mansell which won him the Betty Santer Shield and a small gift from the Chairman.
After the trophies had been presented by Society Vice President Mr Derek Santer, all who helped to make the show a success were thanked, the raffle was drawn and the afternoon came to a close.
If you have a love of gardening or gardens you are most welcome to join the Society. Our membership is a modest £15.OO per year or £25.00 for couples at the same address. You may also come along as a visitor for £2 which includes refreshments. We meet from October to April for talks, presentations and advice in the Main Hall at the Brighton Road Baptist Church and have garden visits and outings in the summer. For more details please visit:
www.horshamhorticulturalsociety.co.uk